A mountain massif located in the southwest of the Republic of Macedonia, with Pelister as its highest peak (2.601 m). By virtue of the multi-staged tectonic activities, the mountain rises in a typical horst between the Pelagonia Valley to the east and the Prespa Valley to the west. To the north, via the mountain pass Gjavato (1.167 m) and Capari field, it is morphologically separated from the Bigla Mountain (1.656 m), while to the south it continues in Greece, all the way up to the mountain pass Vigla (1.505 m), along the Florina – Kastoria road. It stretches along the meridian to a total length of 35 km. The border between Macedonia and Greece passes through its southern parts. Within the territory of our country it covers an area of 436 km2. The dominant geomorphologic form of the high mountain area is the main ridge of the mountain, which also serves as a water divide between the Adriatic and the Aegean basins. Apart from Pelister, there are several other mountain peaks rising above 2.000 m from the ridge. Those are the following: Stiv (2.468 m), Visoka Cuka (2.182 m), Vrteska (2.010 m), Ilinden (2.542 m), Golemo Stapalo and (2.415 m). 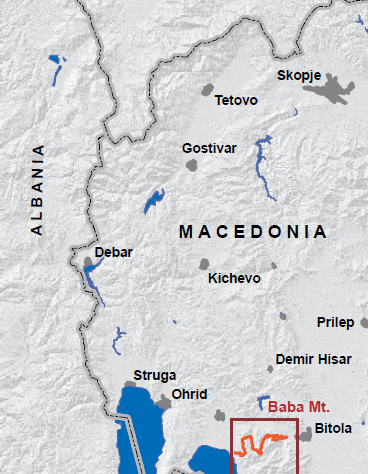 The Pleistocene glaciation resulted in the occurrence of fossil cirques which accommodated the big and the small glacial lakes, or the so-called “Pelister’s Eyes”. Of plant life, the greatest area of the mountain is covered by molica forests, of which 1.174 hectares are under purely molica forests, while the rest is covered by combined molica-fir, molica-beech, molica-beech-fir, beech and oak-beech forests. As regards the elements of the flora, the most important is the presence of the five needle molica pine (Pinus peuce) –
a unique species dating back to the Tertiary age, that grows only on few mountains in the Balkan Peninsula, and reaches the ecological optimum of its development on Baba mountain, spreading across the altitude range from 1.000 to 2.200 m and above.
In 1948, due to the exceptional natural beauty and the historic and scientific significance of the forests and the forest ecosystems of the Baba Mountain, a portion of the mountain covering an area of 12.500 hectares was proclaimed a national park.

Tourist sites to visit in the Region of Baba