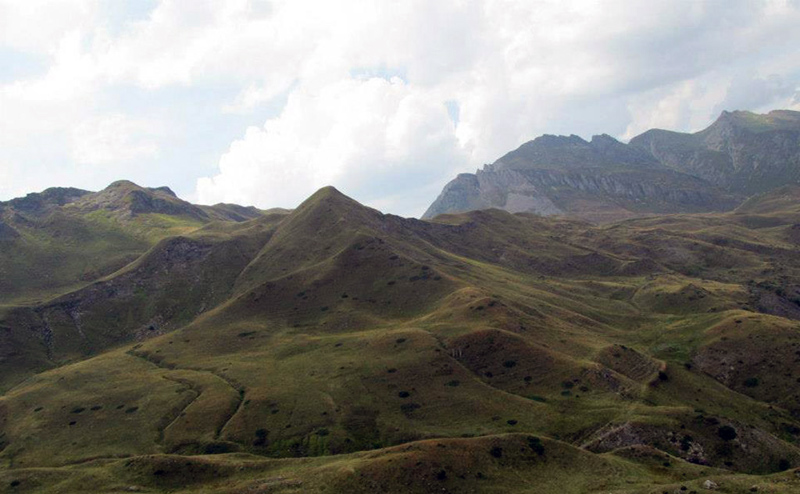 A mountain on the border between Macedonia and Albania, part of the Shar – Korab – Deshat – Krchin – Stogovo – Karaorman Mountain range. The highest peak of Deshat mountain is Velivar (Veli-Vrv) with an altitude of 2.375 m. There are several small glacial lakes on the mountain, the most popular one being Lake Lokuv, covering an area of 4.000 m2, situated on the north-eastern part of the mountain at an altitude of 1.560 m, which makes it the lowest glacial lake in Macedonia. The River Radika, which separates Deshat from Bistra and Stogovo, runs on the eastern slopes of the mountain.
The Deshat mountain ridge encompasses the middle section of the Korab mountain massif (range), stretching from the eponymous high mountain col Deshat (1.976 m) and the valley of the River Zirovnica (Valavica), which also separates it from the Korab mountain to the north, to the high mountain col of Suva Bara (2.080 m) and the valley of River Trebiska, which separates it from Krchin mountain to the south. The total length of the mountain ridge is 7 km. To the east this mountain stretches to the valley basin of the River Radika, and to the west, to the eastern edges of the Peshkopi valley, in the neighbouring Republic of Albania. The border between Macedonia and Albania runs along the highest points of the ridge, with the entire eastern side of Deshat belonging to the territory of Macedonia, and the western side belonging to Albania. The total area within the territory of Macedonia amounts to 53 km2.

The mountain is well covered in forests. The most dominant tree species is the beech, and there are many old, centennial beech trees present. Other tree species that are present to a lesser extent are pine, spruce, aspen, mountain maple and birch. Other widespread plants and forest fruits are cranberries, raspberries, blueberries, rose hip, mountain tea,
yarrow (Achillea millefolium), common sorrel (Rumex acetosa), and fern is also widespread and covers entire meadows. The herbivorous mammals are represented by the deer, wild boars, and the mountain goats, while the carnivorous ones present are bears, wolves, lynxes, and foxes. It is also the habitat of several bird species.

Tourist sites to visit in the Region of Deshat and Krchin