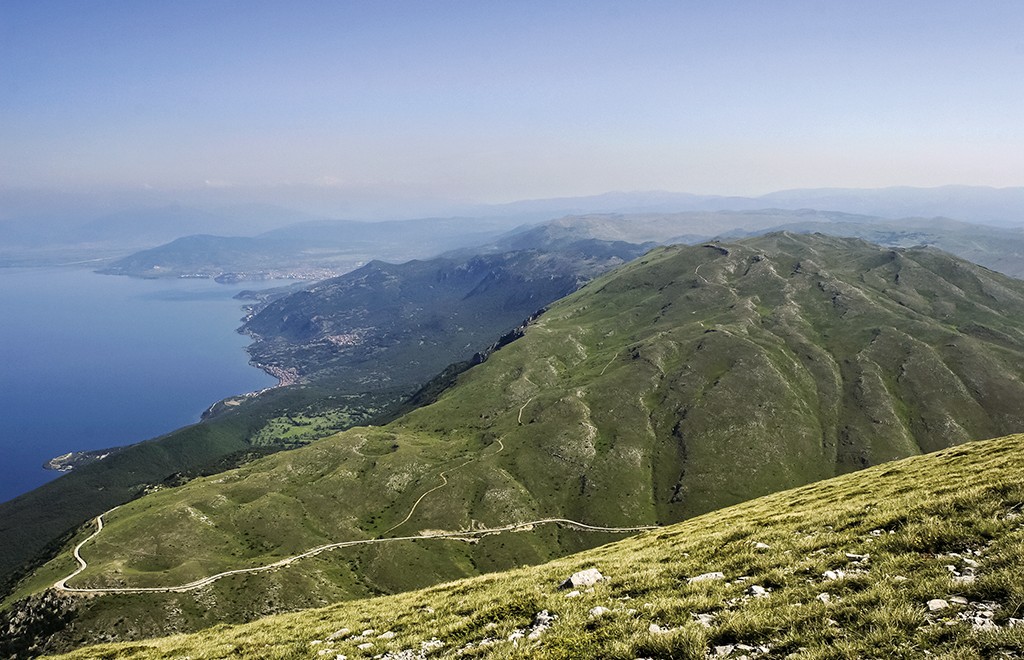 A mountain situated in the outermost southwest part of the Republic of Macedonia, which, in the form of a typical horst, rises in between the Ohrid Valley to the west and the Prespa Valley to the east. To the north it is continued by the mountains of Petrino and Istok, and by the Bukovo col (1.207 m) it is morphologically separated from the Plaken Mountain. It stretches 50 km along the meridian, and its smallest width is between the village of Trpejca and the village of Leskoec (10 km). Only the southernmost
parts of Galichica rise above 2.000 m. Its part south of Zli Dol is called Old Galichica. It is the highest part of the national park with the most remarkable relief. Its sides cut steeply toward the lakes and are furrowed with dry ravines, which give the mountain an inaccessible look. It lowest points are at the level of Lake Ohrid (695 m.) and the level of Lake Prespa (850 m), with its highest peak being Magaro (2.255 m), and there is another peak at an altitude of 2.275 m situated on the very border with Albania. 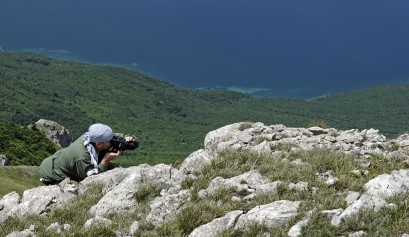 The main geological surface on the greatest part of Mount Galichica are Paleozoic metamorphic silicates, covered by a 500-550 m thick layer of horizons of massive spongy limestone. Such a geological structure and the presence of the karst geomorphological forms make the mountain resemble the mountains from the Dinara system. On Galichica one may
encounter slopes, dolines, uvalas, and karst fields (surface karst features) and caves and sinkholes (ground karst features).
The water permeability of the limestone layer has turned Galichica into one of the driest mountains in Macedonia. Only a few continuously-flowing water springs can be found in its mountainous parts, but those have a very low yield. Compared to the mountainous part, the Lake Ohrid shoreline is rich in water springs. The springs near the St. Naum monastery
complex are the most characteristic ones. They represent a typical karst hydrological feature in the form of a spring.

Apart from their geological and hydrological features, the springs are characterized by a wealth of plant and animal life that inflate its ambient value. Due to the exceptional natural beauty and the distinctive flora and fauna of the forest areas on the Galichica Mountain, a great portion of the mountain, covering and area of 22.750 hectares, was proclaimed a National Park in 1958. The Galichica National Park, which is located in the outermost southwest parts of the Republic of Macedonia, is characteristic for its positioning
between the two lakes – Lake Ohrid and Lake Prespa – as well as for its articulated orography and the interesting geomorphological features (deep ravines, different types of karst and glacial landforms).

Tourist sites to visit in the Region of Galichica

• The city of Ohrid, with many cultural and historical monuments, archeological sites, museums, galleries and memorial houses of eminent people from the history of Ohrid and Macedonia.
• “Museum on Water”, Gradishte, the village of Peshtani.
• Cave churches from the period between the 12th and 14th century at the foreshore of Lake Ohrid, between Peshtani and auto-camping site Ljubanishta.
• Monastery of “St. Naum” and the impressive springs of the River Crni Drim, which is a part of the protected area of Galichica National Park.
• The Golem Grad Island, which is a part of the protected areas of Galichica National Park, due to its rich biodiversity, specific geo-morphological composition, as well as the numerous archeological sites dating from antiquity and the Middle Ages.
• Fisherman’s village Konjsko and the tourist settlement Stenje, wellknown for its fish specialties.