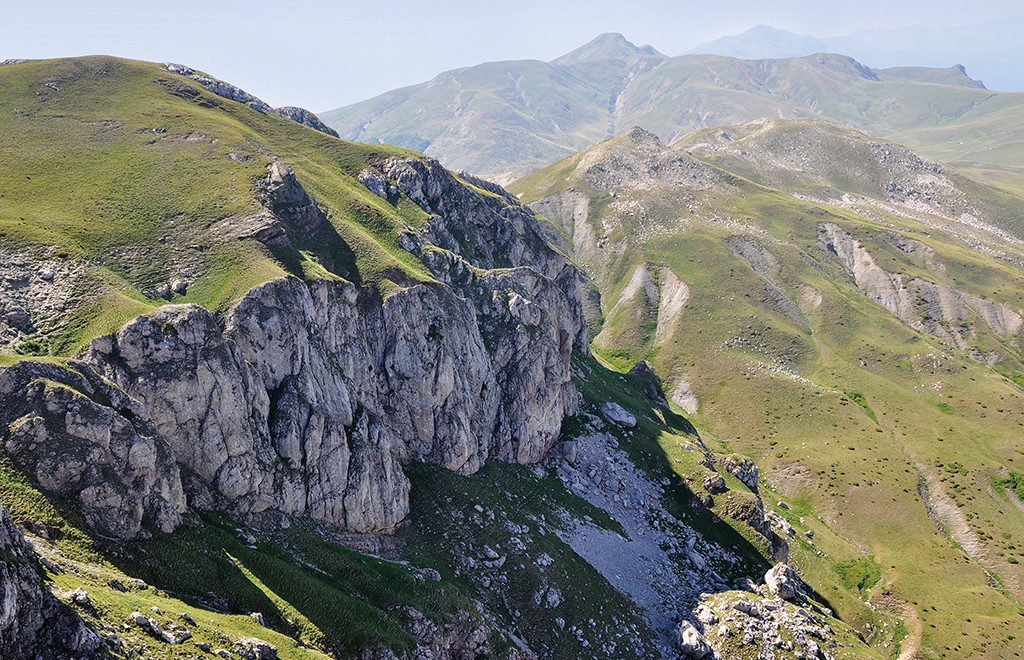 The Stogovo Mountain is situated between the valley of the River Black Drin to the west and the River Sateska to the east. To the north and to the east Stogovo connects to Bistra Mountain, and to the south, via the peak Babin Srt (2.240 m.) it connects with the Karaorman mountain. To the north it is bounded by the Rivers Mala, Garska, and Jamska and the col Jama, and to south, through Karaorman, it reaches the Ohrid and Struga valley. To the west and southwest, the slopes of Stogovo Mountain enclose the Debar field and the valley of the River Black Drin, i.e. the Drimkol and Malesija regions, while to the east and southeast, it borders with the Kicevo valley and the northern part of the Debarca region.
It stretches along the northwest-southeast direction. It is a young sharpridged fold mountain. The ridge is clearly pronounced along its entire length – in some places it is rounded, while in others it is sharp and less articulated. The mountainside to the north at first descends mildly, and then it falls steeply toward the valley or River Mala and its tributaries, the Rivers Garska and Jamska. The highest peaks are Stogovo (2.318 m) and Golem Rid (2.273 m), and it has ten other peaks higher than 2.000 m.
Stogovo is a young fold mountain that formed during the Alpine orogeny. Its geological structure includes philitoids, green shale, carbonates, clays, chert, etc. During the Pleistocene, the Stogovo Mountain was subjected to glaciation; hence today there is a presence of glacial relief expressed in cirques, troughs and moraines. There are three glacial lakes in the cirques: Upper and Lower lakes and Lake Marusha. The flora is present “by stories”, that is, the base of the mountain is predominated by deciduous beech and oak forests, while moving upward they are replaced by evergreen pine forests, and the rocky peaks themselves are surrounded by high grass pastures known as “Alpine pastures”. There are a number of pastures and pens on the mountain’s flattened plateaus called Major and Minor Megdanica, which are surrounded by the Golem Rid to the west, Babin Srt to the south and Stogovo peak to the east. In 2012, individual lynx were detected on two occasions on the eastern slopes of Stogovo, in the Kicevo area, within the framework of the study on the lynx in Macedonia.

Tourist sites to visit in the Region of Stogovo