The trail starts at the information board in the village of Brezno. It is spatially divided into two parts. The first part starts from the village of Brezno to the peak of Crn Vrv. From the beginning of the village until Tri Vode, the trail is a wide dirt road. From Tri Vode onwards, the path continues for some time, and then turns into a mountain trail that passes through the well-preserved beech forest. Moving along the trail, you exit the forest belt and come across several sheep farms. At the last crossing of the river the trail goes into the top of Tearechka Bistrica, which is quite broad and widespread. From here on, the trail rises on the ridge that connects the peaks Suva Dupka and Crn Vrv. From this saddle, the trail continues west to the top of Crn Vrv and returns to the same point where we begin the descent to the village of Vejce.
The trail continues to end on the Kosovo side. One can continue by crossing the administrative border between Macedonia and Kosovo, through the green pass marked on the map. The instructions for going through the green passes are given in the chapter of this guidebook. The path from the Kosovo side, in this guidebook is presented as a path under the name of BHA K2.
The descent towards the village of Vejce or the second part of the trail follows the ridge of the pastures, where we arrive at the village of Vejce. From the only sheep-farm located along this part of the trail, we move to the left and enter the beech forest above the village. After leaving the forest, the road leads through meadows and arable land which the locals
cultivate – a rare example of an active mountain village in the Republic Macedonia. The trail ends in the village of Vejce. 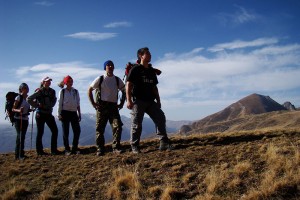 • On the first part of the trail, there is a wonderful view of the top Chaushichka Valley with the peak of Ezerski Vrv, from Tri Vode.
• The second part of the trail, starting from the saddle until the village of Vejce offers an unforgettable view of the valley of the River Pena, The Leshnichki Karpi and peaks Titov Vrv and Kobilica on the right-hand side.

Most likely the highest peat bogs in Macedonia are located under the Crn Vrv peak, above the cirque of the spring area of the River Bistrica. The highest peat bog is populated by the white cotton grass (Eriophorum scheuchzeri), a plant species that, until recently, was unknown to the Macedonian flora. This plant of circumpolar distribution (Alaska, Canada, the Arctic islands, Greenland, Siberia, as well as the Alps) can be found in our country only at this site.

In the village of Vejce, on the upper northern segment of the village there is a workshop that produces the traditional Albanian string instrument known as “Chiftelii”. The family that produces these instruments has done so for many years. While visiting this house, you can see the process of making the instruments, and hear the music that comes from combining multiple types of instruments, as well as being able to buy souvenirs made in the shape of the instruments. Let’s not forget the hospitality of the locals, and the coffee that will be offered to you by every local.