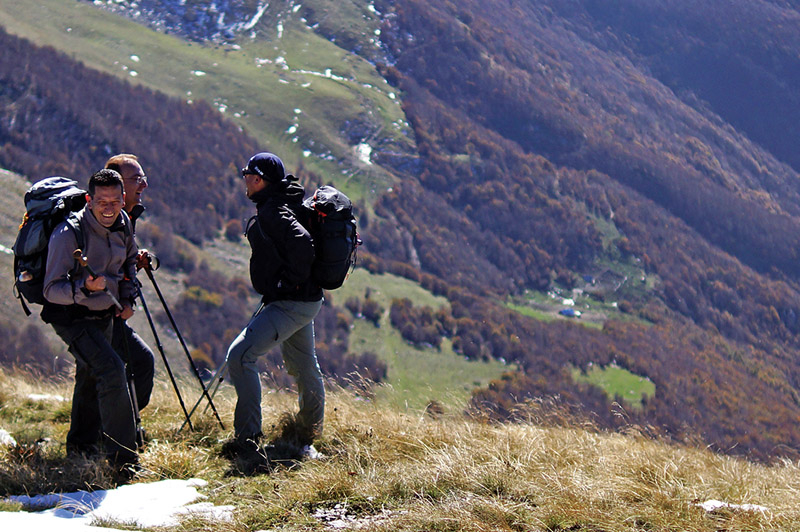 The route starts from the information board in the village of Kosovrasti. The general direction of the route is northbound. Starting from the village, the route goes to the right and then left towards Peak Bajrak, where it arrives at the foothill of Peak Crvena Plocha. After climbing Peak Crvena Plocha, the route may end there, or connect with the route coming
from the village of Skudrinje. That route continues northbound, in a northwest direction passing under Peak Rudina until the area of Vrtok, at an altitude of 1.900 m. From there, it is possible to climb Peak Krchin or continue northeast and descend to the village of Bitushe.

• From the route to the south there is a beautiful view of the town Debar and Lake Debar.
• After climbing the ridge, under Peak Crvena Plocha, you can see the peaks Rudina and Krchin, the basin of the River Radika and Mounts Bistra and Stogovo. 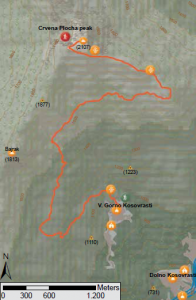 The area above the village of Kosovrasti is populated mostly by underdeveloped beech woods on steep slopes, while the peak Crvena Plocha is under high mountain pastures on rocky ground. It is also the site of a specific violet which resembles the most the aetolic violet (Viola aetolica), which is characteristic for the southern mountains of the Pindus range, and can be found only on Galichica in our country.

Gorno Kosovrasti is a village on the border between the areas of Dolna Reka, i.e. the Mijak ethnographic region and the region of Debar (the Brsjak ethnographic region). It is surrounded by dense oak, poplar and aspen woods, and many other varieties of deciduous trees and due to the composition of the soil, rocks and limestone, the village and the surrounding area is rich in water springs with fresh mineral water, feeding the well-known spas of Debar – “Kosovrasti”.