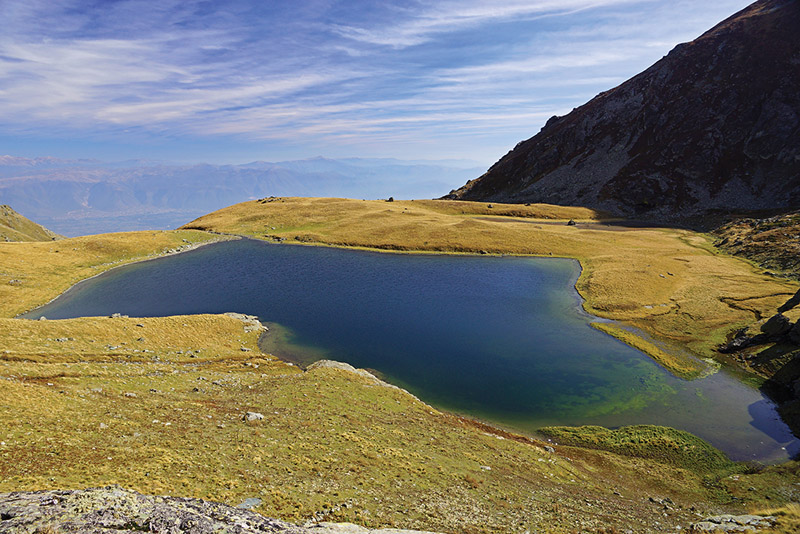 The trail starts at the information board, which is placed in front of the village of Gurgeviste, at the place where a dirt road splits off and leads to the channel “Sharski Vodi”. Moving along the wide dirt road, we go through a forest belt. The trail goes on the southern slope of the Bristavec peak. The villages of Gurgeviste and Lomnica remain on the lefthand side of the trail. Once you climb to a height of 400 meters, you exit the channel “Sharski Vodi”. Along the channel there is a wide dirt road. From this place, the trail continues along an old dirt road that leads to the foot of Bristavec. Leaving the forest, we go onto a dirt road that starts climbing slightly to the foot of the peak. You can also get to this point by using an off-road vehicle. At an altitude of 2.000 meters, the trail moves along a mountain path that bypasses the Bristavec peak and leads to Lake Crno Ezero. Bypassing the right hand side of Lake Crno Ezero, we move towards the Rudoka peak. It passes the rocky cirque from the lake and reaches a plateau below the peak where there are more non-permanent lakes. From this place, it reaches the ridge of the Sar Mountain where moving left in an arc toward the south, we arrive at Rudoka peak, the highest peak in Kosovo. The return to route follows the same path. The trail may be continued towards the Kosovo side through the green pass which is marked on the map. The instructions for passing the green areas are given in the relevant chapter of this guidebook. The trail on the Kosovo side is explained as the following trail with the title BHA K4. 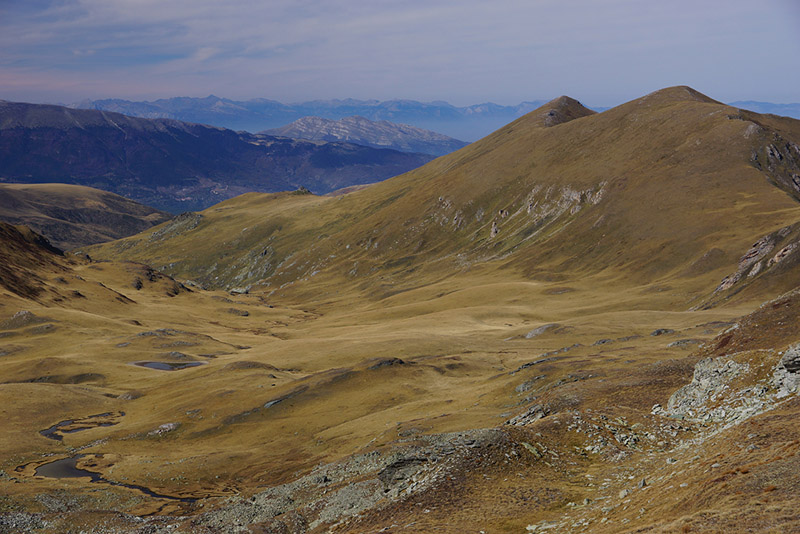 • The first panorama of this trail is at the foot of the Bristavec peak, where towards the southeast you have a beautiful view of the part of the Polog area including the city of Gostivar.
• Climbing over Lake Crno Ezero, you’ll find the landscape to be remarkable. A dark lake surrounded by steep dark rocks, which display the wilderness of the mountain.
• The reef of the Sar is a view towards the Kosovo part of the mountain. The view towards the Sutmanska plateau is enriched by Lakes Chelepinski and Ginivoda.
• An absolute must is the view from the top. 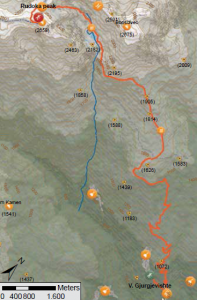 In addition to the high mountain pastures, this trail is characterized by the large areas made up of silicate rocks and stony sites with specific vegetation and a few small chamois herds (Rupicapra rupicapra balcanica). At Lake Crno Ezero one may see the local Shar Mountain endemic plant – Doerfler’s cinquefoil (Potentilla doerfleri). At Rudoka, according
to one German botanist, one may also find the sub-Arctic and Alpine azalea (Loiseleuria procumbens), which, unfortunately, has not been observed by any Macedonian botanists since 1954.

The characteristics of this trail are the channel “Sharski Vodi” and Lake Crno Ezero. The channel is actually a system of channels that gather water from the rivers of southern Shar Mountain and lead to the reservoir, known as Lake Mavrovo. The system was built between 1969 to 1977, and is still active today. The dirt road that runs around it, is about 80 km
in length. In recent years it has been used for mountain biking and offroad tours with 4×4 vehicles. Lake Crno Ezero, at an altitude of 2.170 meters, is the second largest lake in the Shar Mountain range, and has an area of 33.030 m2, and is 11 meters deep. 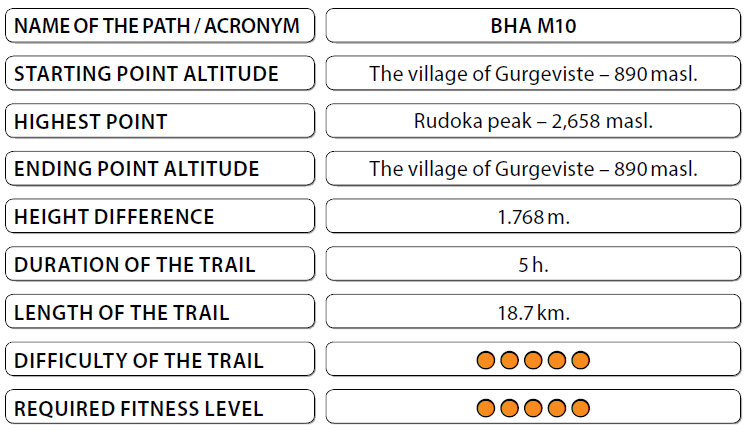