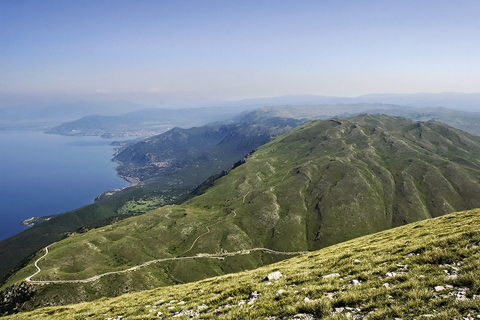 The trail starts from the asphalt road Ohrid – St. Naum in the center of the village of Pestani. It runs across the plateau Trpejcko field and St. Spas church. It moves on to the picnic place Korita, to the mountain road slope, Lipova meadow, at 1.630 masl. This point makes the path available in many varieties and for the needs of different target groups. In most of the length, the trail runs through beech forest, while in its upper parts the trail moves through pasture. The ground is generally combined dirt and rock. From this position
moving to the south, the first part the trail rises steeply and then gently passes through the ridge Galicica and after that it reaches the Magaro peak. Following the same path the tour ends in the village of Pestani. The tour can be adjusted using asphalt road to the picnic area Korita or to the mountain road slope Lipova meadow which makes the hike easy to moderate. 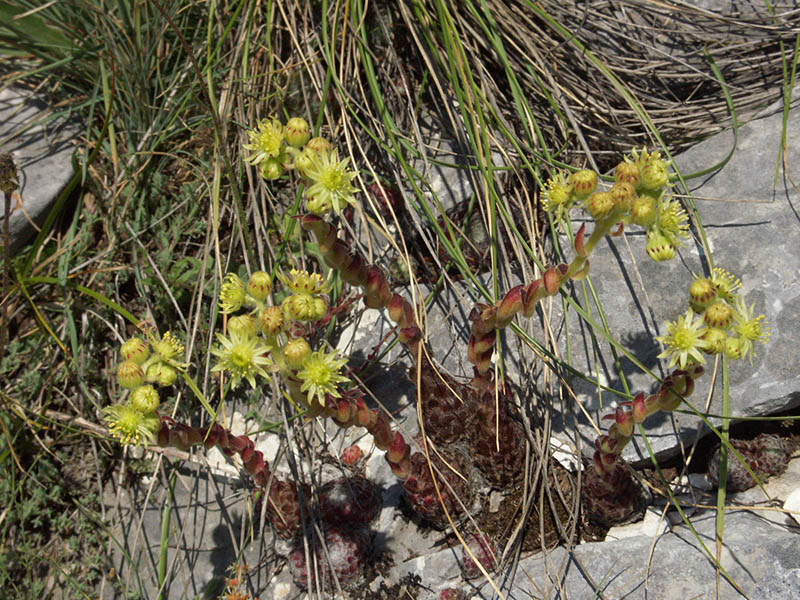 • From almost every point of the mountain ridge, which stretches out at over 1.900 masl. beautiful panoramic views over the horizons of both lakes and mountains that surround it can be seen. Surely this is the only view in Macedonia of its two largest lakes. 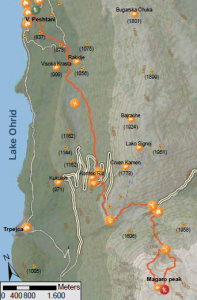 The mountain of Galichica is exceptionally abundant in terms of plant diversity. It is the habitat of numerous endemic species. Galichica is predominantly a limestone mountain and it features the most typical karst landforms in our country. In terms of vegetation, the most featured are the dry mountain pastures at a limestone base, limestone rocks and boulders, as well as a large number of forest communities. Some of the endemic species are: the Galichica houseleek (Sempervivum galicicum, which forms a part
of the S. ciliosum complex including non-glandular taxons), eternal flower (Helichrysum zivojinii), Mayer’s catmint (Nepeta ernesti-mayeri), Mayer’s milkvetch (Astragalus mayeri), Cvijic’s crocus (Crocus cvijicii), Horvat’s rockbell (Edraianthus horvatii), several knapweeds species (Centaurea spp.), etc.

To describe the characteristics and cultural and historical sites in this area, it is necessary to design an addition to this guidebook. The wealth of historic and cultural monuments in the Ohrid region is of great importance for the country. Here we will mention the Museum, “Bay of Bones”, which is a reconstruction of prehistoric palafitte settlement from the
late Bronze and early Iron Age. Along the trail on the ridge of the mountain near the Magaro peak, the remains of trenches and buildings, dating from the period of the First World War can be seen.

• Accommodation and food is available in both the city of Ohrid and the village of Peshtani. 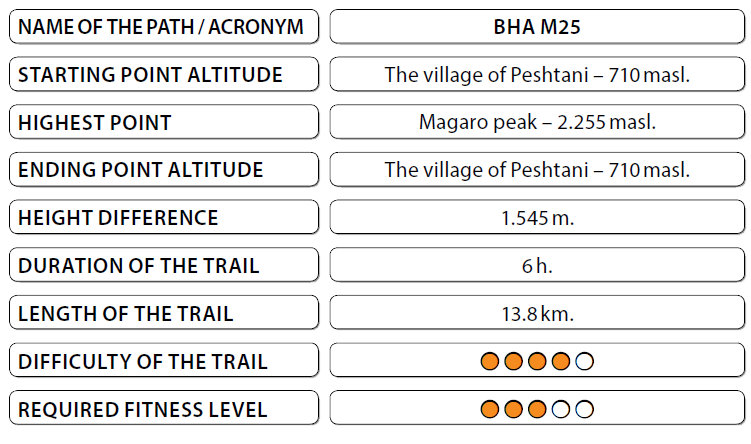