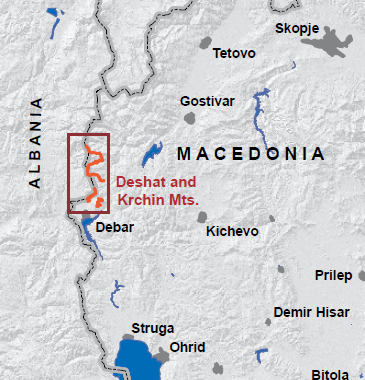 A high mountain in western Macedonia which presents a continuation of the Deshat Mountain to the north. It its 13 km long and stretches along the meridian from Suva Bara (2.080 m) to the north, to the bottom of the Debar Valley to the south. The mountain crest is clearly pronounced, with several peaks higher than 2.000 m rising above it. The
highest peaks are Golem Krchin (2.341 m), Rudoka (2.238 m) and Crvena Ploca (2.107 m). In geotectonic terms, the mountain is made of flysch deposits. Within the area of the Kosovrasti spa, the limestone is replaced by gypsum, anhydrite, and sulphurous deposits, while white and grey limestone with a thickness of between 300-400 m feature in the vicinity of the Banjiste spa. A gypsum processing plant was built in the region due to the great deposits of gypsum (the largest deposits on the Balkan Peninsula).

Tourist sites to visit in the Region of Deshat and Krchin